We are currently running a Winter Warmer Blanket Drive until the 3rd of August in aid of The Haven Night Shelter. If you would like to donate blankets they can be dropped off at our shop during our trading hours 10:00 to 16:30. 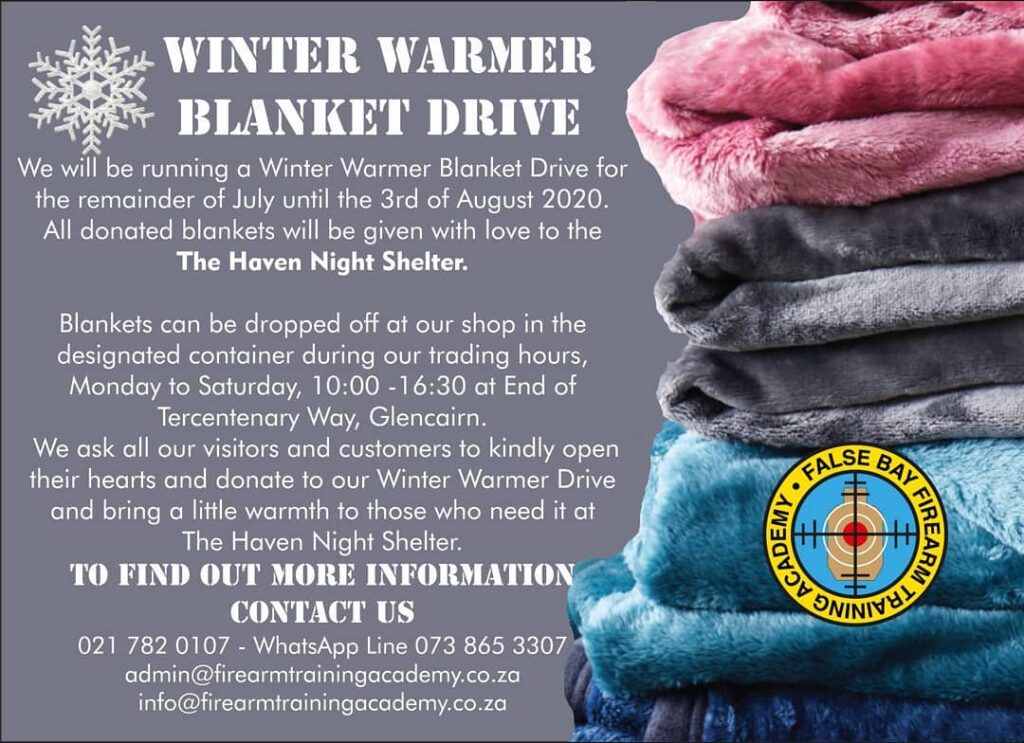 We, the False Bay Firearm Training Academy, may continue trading as per the below directive, however as the range itself ie False Bay Sports Shooting Club is closed until further notice, the Academy shop will only be open by appointment as we cannot justify paying full time staff based on the few (welcome) sales.

Any enquiries or to make an appointment please use the WhatsApp (only) number 0738653307 or email info@firearmtrainingacademy.co.za. 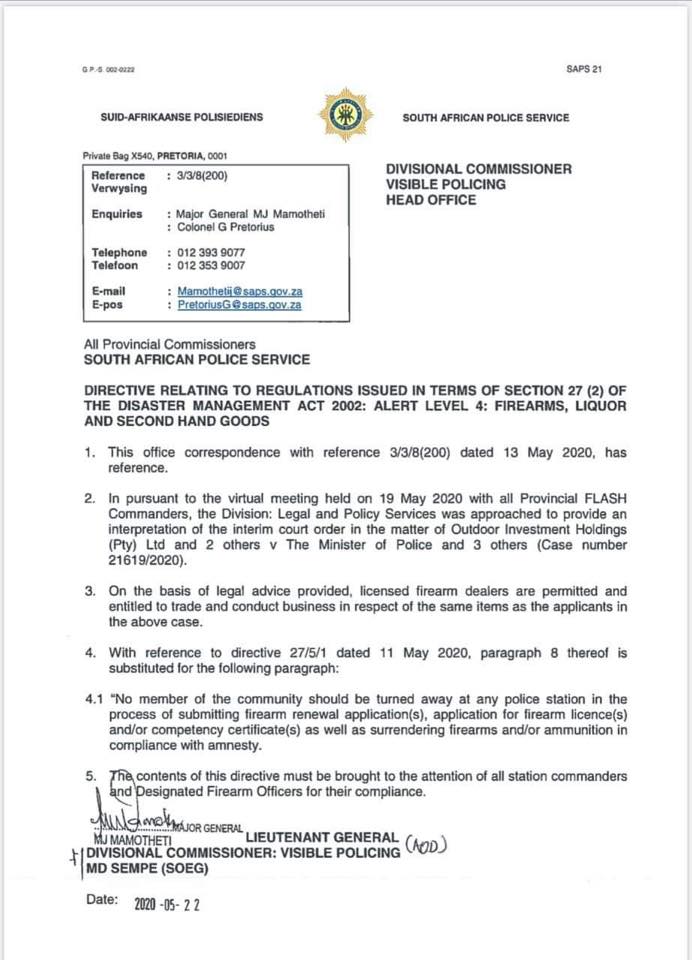 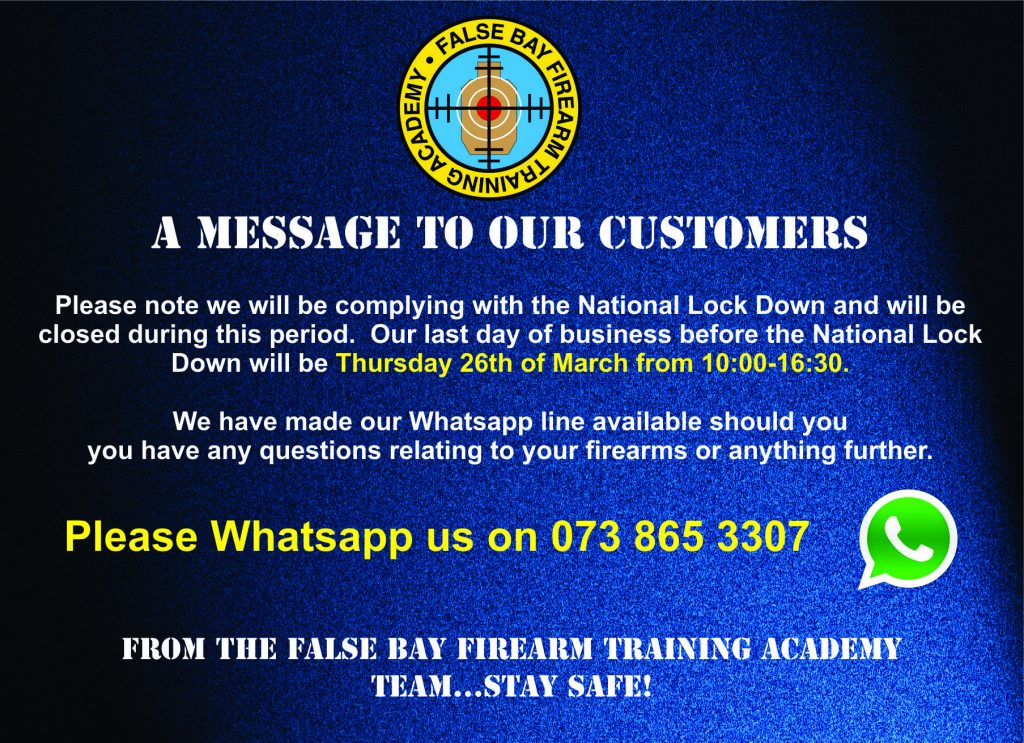 A media statement from SAADA was released on 20 January 2020. The media statement was in response to Minister of police Bheki Cele’s irresponsible remarks towards a licensed dealer who surrendered legally possessed firearms and unwanted ammunition under Firarms Amnesty 2019.

It’s important to keep our community updated with all the latest news.
Please read this important message from Natshoot about your SAPS paperwork under Amnesty.

“SAPS have informed us that only the original owner of a firearm of which the licence has lapsed may apply for a new licence for that firearm under the amnesty.

That means Jack will have to wait until the new licence has been issued to John before he can apply for a new licence for that firearm if John wants to sell or give it to Jack.

In the meantime, we are receiving Emails from members who experience some problems at police stations when handing in firearms under the amnesty of which licences have expired, and for which they want to submit a new licence application.

Officers at police stations are not completing the amnesty forms correctly and are not indicating that an application for a new licence will be submitted within 14 days.

Members are urgently requested to please let this office know of any problem as well as good experience they have had when making use of the amnesty.

Please also inform the office what the police did with the firearm you handed in under the amnesty at your police station (did they put it in a box, crate or cupboard – did they take it appart etc.).

Please send all Emails in this regard to legal@natshoot.co.za

Please be vigilant at all times!
Natshoot Office”

The below message and attachment is from Martin Hood – SAAADA’s Attorney.

You may download the SAPS circular on the link provided below.

“The importance of the document that I have attached to this e-mail is such that I thought it was justifiable to bring it to your attention. I urge you to carefully read the national instruction issued by the National Commissioner of the South African Police Services, dated the 19th of November 2019.

We are all concerned about high levels of crime, the conduct of the police, their abuse of power and the consequent fear that has arisen by many persons that interact with the South African Police Services where such interaction results in intimidation, abuse, false arrest or has an otherwise unsatisfactory outcome.

We have long been aware of police misconduct in effecting arrests where the law does not justify such an arrest, such as to obtain a statement, to create embarrassment or to intimidate a person into admitting guilt. The abuse of the Thursday and Friday arrests is widely known and the consequent solicitation of bribes for release in order not to spend a weekend in prison is prevalent.

The latest national instruction acknowledges the existence of widespread abuse of the power to arrest and the lack of understanding by members of the South African Police Services as to what powers they have and how they should exercise them.

The national instruction acknowledges that various forms of abuse exist and seeks to stop such abuse.

The National Commissioner in the instruction acknowledges that arrest is a serious restriction on a person’s freedom of movement and their dignity and privacy.

The National Commissioner acknowledges that an arrested person must be brought before court as soon as is possible and not simply within 48 hours.

He acknowledges that some senior police officers have set targets for the effecting of certain numbers of arrests within specified time periods, that persons have been arrested for minor offences where no such power exist to effect an arrest, where arrests have been made to compel the provision of a statement and that arrests have been made to meet illegal targets or in order to inflate numbers for the provision of basic services such as food.

The National Commissioner has directed that it is only in exceptional circumstances and where a person is specifically authorised by an act of Parliament, that an arrest can take place without a Warrant of Arrest.

The directive states that the detention of a person is a serious and humiliating infringement of their rights and must be limited to a limited a minimum period of time and should be necessitated by the interest of justice.

This signals an intention to radically reshape the conduct of the South African Police Services and to curb the abuse of the power to arrest.

I urge you all to read the national instruction and have a copy with you at all times (for example taking a photograph and keeping it on your smart phone) in order that you know your rights and to explain a police officer’s obligations to them in the event that you are in the unfortunate situation where you are threatened with arrest by the South African Police Services.

This is a must read for all everybody.

Here are the prices you can expect to pay at our Sunday Funday on Sunday 01 September 2019. No firearm licenses needed, no shooting experience needed – just bring you friends and come have some gun fun with us! Bring Spring in with a Bang this 2019!

We are so excited we can barely contain ourselves! False Bay Firearm Training Academy is hosting our first ever Sunday Funday! Come along and join in the fun. Shoot various handguns, an array of rifles, shotguns and even the 50 cal will be available – at knockout prices! No bookings required! Join us from 10h00 till 15h30 on Sunday 1 September 2019 and bring spring in with a BANG!!!

Visit our facebook page to view the event here. Make sure you like our page as price lists, news, prizes and specials will be released as the month progresses.

Keith Biermann and Mark Human will be running a Tactical Course at the beginning of July 2019. All the details of this course are below. Call 021 782 0107 or email info@firearmtrainingacademy.co.za for more info or to book your slot.

Lots happening at False Bay Firearm Training Academy for the next few days and months! We are offering a great Mother’s Day Special. So many people who do their Proficiency come do a training session before hand as they have never handled a Firearm before. This helps build confidence leading up to the course date. So take advantage of this great special!

This Mother’s Day our gift to you is a Free Training Session worth R450 with every Proficiency purchased for Mom or by Mom for herself. This free gift is valid for all Proficiencies bought between today 06 May 2019 and Monday 13 May 2019. Vouchers for the Free Training Session are valid until 31 August 2019 (T’s&C’s apply). Email bookings@firearmtrainingacademy.co.za or call 021 7820107 for more information. Sorry Gents, this one is only for the ladies but will definitely score you points if you are the one buying this gift for her😊

We helped bring you Steve Anderson and now Kita Busse Movement Training! The 2 day course will be in October 2019. To book this course please contact them directly to book your space. Spaces are limited so don’t delay.

If you have not followed us on Facebook, head on on over to our page and follow us. Remember we are a a licensed dealership, we sell Firearms, Ammunition and accessories. Pop into our shop for a browse.