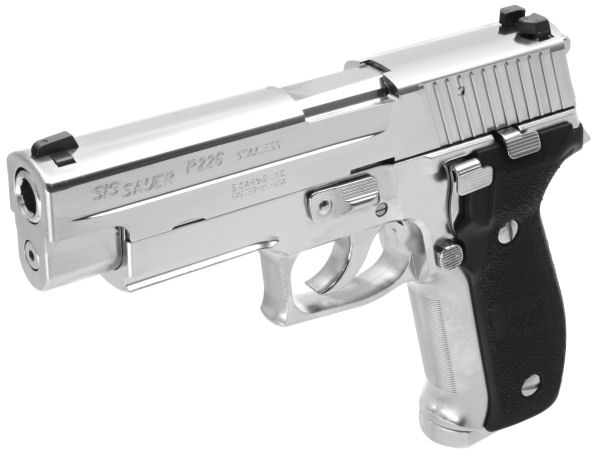 “Fundamentals of Shooting with a Pistol

If you’re using a red dot or a scope, focus on the target and make the reticle slightly fuzzy.​

This is how the sights are supposed to be aligned together. On 99% of pistols you’re going to be using a notch and post style sight.

All you have to do is put the post in line with the top of the notch and put an equal amount of light on either side. Most sights will have dots to line up or a line and a dot. Either way, put the post in the middle and shoot. On scope or red dot’s going to vary but you’ll want the reticle to be centered and even as much as possible before you shoot.

This is usually the fundamental that gets people. Trigger control is the hardest fundamental to master because it’s the only physical part of shooting a gun. Shooting is 99% mental, there’s no physical reason you can line up a scope a nail a target at long range. The mental reason is because you’re freaking out from the recoil of the gun.

Guns scare everyone just a little bit when it goes off, everyone! Humans have a fear of sharp loud noises and a gun does exactly that and the reason most people can’t shoot pistols well is because they jerk the trigger and skew the shot. Essentially there’s two steps to a perfect trigger press.

That is all you have to do to have a perfect pull. In an ideal world, you’ll have pulled the trigger to the rear without disturbing the sights and the shot will go exactly where you intended it to. If not, some other fundamental was disturbed.​

Follow through can be called +1 when you’re shooting. All you have to do is make sure you hold the shooting position for a half second after the bullet leaves the gun. You need to hold the position because your mind will make you drop the gun or move the gun while you’re pulling the trigger.

There’s multiple ways to do ensure a proper follow through but the easiest is to do two things. Keep the sights aligned with the bullseye or target after the shot no matter where the shot went, and ease the trigger forward to the rest point without losing hold of it.

This is a hokey one. It only applies for those people shooting the smallest of groups and at the greatest of ranges. A great example would be a handgun hunter shooting out to 150 yards or more. The amount your chest moves when you’re breathing can be as much as an inch.

If you do it with your breath all the way in or all the way it doesn’t matter as long as you’re completely motionless. If you’d like more advice, the “best” way to go about controlling your breath is to take a normal inhale, then exhale half your breath and hold it until you break the shot. That way you have a little breath in you but your muscles aren’t working to hold in too much air.