Keith Biermann has been shooting and loving it since the eighties, and has been shooting competitively since 2003. He has competed in the IPSC, the IDPA and internationally at the IPSC African Area Champs and, in 2011, he attended the IPSC World Shoot in Greece, as his daughter’s manager. 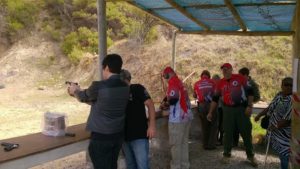 In most European countries you cannot just shoot. Assault firearms and handguns are even difficult to arrange for shooting training. Typically, it’s only clay target (pigeon) shooting! So, come for a full shooting experience with assault weapons and handguns, in a safe and controlled environment.

Packages include instruction, club entry, use of safety equipment, use of firearms and ammo (under supervision, of course!), followed by shooting for pure fun and then for a score. What better way to spend an afternoon!